July 2012 winner of the Herbs on Saturday contest from Lavender & Lovage and hosted by Bangers & Mash!

One thing about motherhood I didn’t expect, was the friendships you make with other moms you meet along the journey. And one of those friendships, with wonderful Hiromi and her son Dylan, brought me one of my favorite herbs: shiso, fresh from her garden. Shiso, also known as perilla (more useful information on the herb here), is often served in sushi bars as garnish. It is a member of the mint family. When I describe its flavor, I say it is somewhere between basil and mint. But that doesn’t do it justice. It has such an elusive taste that seems to elevate the texture and fattiness of raw fish, but also flavors steamed rice wonderfully. Like lavender, it has a powerful scent, and I’ve been wanting to make ice cream with it for a long time. So when on a hot Tuesday, I met Hiromi in front of the organic fruit stand at the Farmer’s market and she handed me those beautiful shiso leaves from her garden… well, the idea for peach-shiso ice cream presented itself. Life is serendipitous that way sometimes. Or at least, a lot of recipes are.

Pablo had never had ice cream before, and I really wanted to make it homemade, as the ice cream sold in stores is so high in sugar content, and I am wary of sugar more than anything else. The amazing thing about babies and toddlers, is their ability to both enjoy very mild, subtle taste (plain yogurt, plain tofu), and very strong and flavorful things (olives, pickles, blue cheese) at a young age. But if we introduce an overload of sweet flavors at the outset, how can they possibly enjoy pure and subtle flavors, like a simple vanilla ice cream? Conversely, if we wait until they’re older to introduce what we consider to be strong or odd flavors, we take the chance they might reject them for being too unfamiliar. So my strategy has been, from the very beginning: 1/ to avoid anything too sweet (big fan of plain yogurt), 2/ to offer whole foods with every category of flavor (bitter, salty, sour, sweet andumami), without the preconceived notion that because he’s a baby, he won’t like it. Exposing him to those flavors (as well as their smell, since smell is an essential component of taste) while still very young (from 6 months on, depending on any allergy risk) has been a key part of my strategy. 3/ To get him to taste the foods pure first, 4/ To keep trying and offering over and over again if he doesn’t seem to like something.

I imagine his tastebuds as these very sensitive and delicate sensors, not to be overloaded or crushed, but to be challenged and exposed to a variety of things (I suppose you could say the same of raising a child, couldn’t you?)

This ice cream definitely fit the bill for exposing Pablo to the subtle flavor of shiso, combined with the known flavor of stone fruits and dairy. It has a very mild taste, it is not that sweet (the only sugar comes from the honey). You taste the fruit first, and the shiso stays as an aftertaste. The whole family enjoyed it, I gave it to Pablo for his afternoon snack (“le goûter”) with a couple of small oat cookies. 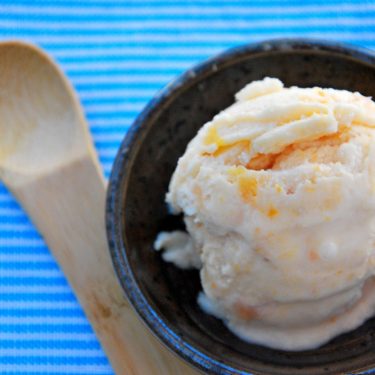 Age : 12 months and up (mostly because of the honey).
DID YOU TRY THIS RECIPE?Mention @frenchfoodie or tag #frenchfoodiebaby!