During the whole month of January, most French families have one favorite food ritual they can look forward to. The “Kings’ galette”.

It is originally made to celebrate the Epiphany on January 6th. The tradition of the cake on that day is typically French and was instituted by the church in the 13th century. But contrary to a lot of countries in the world where the Epiphany remains a very religious celebration, it has become widely secular in France.
Part of what makes this so fun, is the placing of a “fève”, nowadays a small porcelain figure, inside the galette. This was an 11thcentury Roman tradition of placing either a coin, or for the poorest, a dried fava bean (fève in French) inside a loaf of bread to determine the leader of a group (whoever got the piece of bread with the coin or bean was the leader).
The celebration as most French families do it today is a sort of hodgepodge of these two traditions. A “fève” (it is now mostly a small porcelain figure) is placed inside the almond galette. The tradition says it is to be cut into the number of guests plus one, the portion “for the poor” (to be given to the first poor person passing by – I remember my mom telling me about the “for the poor” piece, and how it made me realize as a young child that some people out there may not have enough to eat.) A napkin is placed over the galette, and the youngest member of the group goes under the table and designates to whom each piece is to be given. The one who gets the piece with the fève is designated the “king”, and gets to choose his queen (or vice versa). 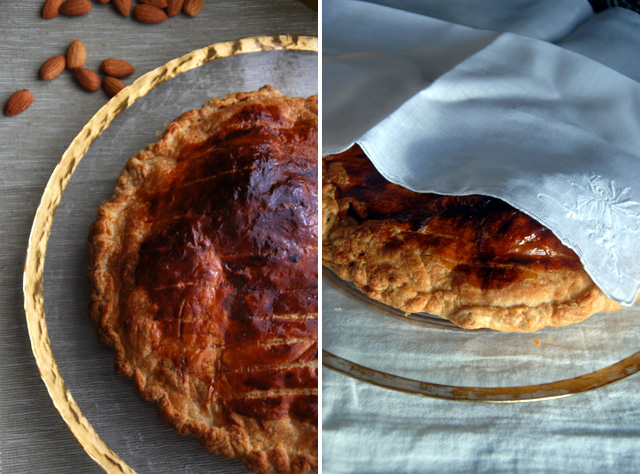 We know how rituals in general are good for young children especially. They are landmarks in their life, something expected that makes them feel safe, something fun to look forward to, whether it’s the bedtime ritual, or the Sunday morning ritual, whatever that may be for each family. When we go through a ritual, we are in the moment, engaged, centered. When I think ritual, I think: comfort, slow, reassuring, mindful, grounding. I think as adults in this busy 21st century life pulling us in all directions, we need our own rituals just as much as our children do. (I recommend this great post on Food Loves Writing on this topic, by the way).
So of course, you may not be surprised to hear some of my favorite rituals are food rituals. Cooking and enjoying family meals, are some of the rituals that help keep me grounded every day.
Food rituals are a big part of the approach to food in France. I grew up with all kinds of them, whether it was the placing of a fork under the plate for the vinaigrette to eat artichoke leaves, or the tapping of the soft-boiled egg and the dipping of the mouillettes, or the cutting of a radish into a flower to insert a sliver of butter in it, to be devoured with a sprinkle of salt.
A ritual means you are taking the time to do something of value, and you are mindful of what you are doing, you are engaged in it, with mind and body. Food rituals are a great opportunity to teach, and learn, this mindfullness in an organic way, as they make food fun, they make the eating experience special and pleasurable. They create a positive association, all wonderful things, all part of the education of taste.

This galette is definitely one of the most beloved food rituals for French kids. It is usually an opportunity for the whole family to get together and share a playful moment. Usually families have the galette a few times throughout January, an excuse to get together with friends and relatives they may have missed during the holidays. It’s a wonderful moment where all generations get together, to be all about the galette, and the fun of waiting to find out who gets to be king or queen.

Now, if you will allow me to go on a tangent here, for the sake of contrast.
I have started taking Pablo to a toddler art class at a well-known national kids’ activity center. And to my great amazement (aka inner cringing), at 9:50am, the toddlers are offered a snack! And not only that… but the snack consists of a good ¼ cup of goldfish (cringe cringe). And not only that… but the goldfish is to be eaten while the teacher reads a story!

So I kindly said we “didn’t do snacks” in our family, let Pablo have 3 goldfish so he didn’t feel completely excluded, and that seemed to work fine. I have three major issues with this, one of which I’m interesting in exploring here:

So at the far opposite side of the spectrum of mindless goldfish eating, the celebration and savoring of the galette as a multigenerational group experience, where everyone is in the moment, not doing anything else than enjoying the galette and each other’s company in a playful way, is a fantastic food ritual creating so many wonderful associations in our minds.

So why not give it a try with your loved ones? Start the new year by creating a new tradition, a new family ritual, by experiencing a moment of togetherness with the ones you love, sharing a playful moment of connection where children and adults are on the same plane.
Every bakery and supermarket sells galettes starting January 1st, but I’ve started making it myself in the US out of necessity, and it is very easy and just delicious homemade.
As far as the crust, let me just say it: I am scared of making puff pastry! But that won’t stop me from trying some time this year, I promise. But for this one, I did what most French do, I bought the frozen puff pastry, and it works just fine (I got mine at Trader Joe’s, it was very good).
So, are you willing to give it a try? Would you like to institute new food rituals for your family? Which food rituals do you already have and cherish? Please share, I really would love to know. 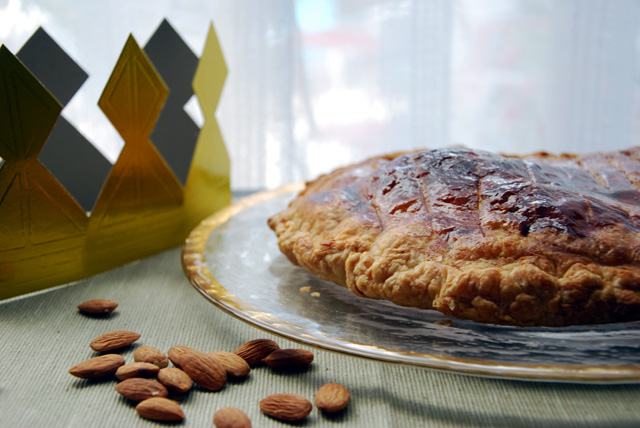 Age for babies: 10-12 months to be given a taste of almond paste and puff pastry (watch out if you put a fève of course, no whole almonds until they’ve got some molars).
DID YOU TRY THIS RECIPE?Mention @frenchfoodie or tag #frenchfoodiebaby!