Before proceeding to a new installment of the “Goat Cheese Summer Series“, I’d like to wish you and your loved ones a wonderful holiday, hoping you celebrate America’s birthday with good food and good company.

This Fourth of July, I will have lived 16 years in the United States.
And I think I have come to a good balance between my French and American cultures.  It’s not a linear balance (life just isn’t linear, is it?). In some ways, I guess I am very French, and in others, very American. I never like being asked if I feel more French or more American, or being put in a position to chose between the two, because I really embrace both cultures. I owe a lot to both. They both make up who I am today. I have been in both places long enough to be aware of the limitations of each. So I embrace both cultures with open eyes, and somehow, it works.

What is culture, exactly, anyway? What does it consist of? It is such a complex concept, made up of so many impalpable things. That is what is
so fascinating to explore and discover while traveling. Really, it is what is
so fascinating about the human race. And no need to be an expat to experience multiculture. It’s part of anyone who’s lived in more than two places, or with family from different horizons. Such richness. And so much of it in America’s “melting pot”.

I think two major components of culture are language, and cuisine. I feel so blessed to be raising Pablo not only as bilingual, but as bicultural, and exploring what that means as he grows. Being so far away from Francemost of the year, cuisine is one of our strongest link to French culture.

Tonight at dinner in the backyard, when came time for the cheese course, sitting on his French grandmother’s lap, Pablo proceeded to go through our fromage box, checking each cheese one by one, asking which one is goat, and saying as he picks each one : “This is a good one” (this has just become his new ritual). Then his grandmother gave him a sample tasting of a few, some on bread, some pure. He couldn’t be more delighted, savoring it on his tricycle (cringe… not eating at the table. Summer meals have definitely been laxer around here!).

Then he put a ball in the basket, and high-fived and knuckle bumped his father.

I guess it doesn’t get more bicultural than that.

When Vermont Creamery contacted me for the Kids & Kids campaign to promote the nutritional and gastronomical benefits of goat cheese for children, I wanted to showcase not just their “kid-friendly” (there’s no
such thing, in my opinion) creamy goat cheese or fresh chèvre, but also their wonderful aged cheeses, because there’s no reason not to introduce babies to them early on (8-9 months is when I started Pablo on all varieties of goat, sheep and cow cheeses, including blue).

Perhaps a perfect incarnation of our bicultural symbiosis is this s’more of sorts I’m sharing with you today. After all, what’s more American than this campfire favorite?

Begrudgingly sharing with the family one of the Bonne Bouche ash-ripened goat cheese Vermont Creamery kindly sent me last week, we got to reading the label. Under “Pairing”, it listed the classic honey, figs, and… dark chocolate?

Now any French purist would call this sacrilegious. Because to be honest with you, even a piece of good bread doesn’t do this incredible cheese justice. It is meant to be enjoyed pure, on finger tips, with perhaps a sip of Riesling. And Pablo has been doing just that (sans Riesling, that is),
with great delight. So I admit, when I read that, I cringed a little.

But the idea of this goat cheese s’more was thrown in in a bout of family brainstorming, and I decided to give it a try, knowing it would be a perfectly symbiotic French-American Fourth of July treat. And a good excuse to try making these salty herb, walnut crackers adapted from Cannelle & Vanille’s cookbook, Small Plates & Sweet Treats (which I just love, by the way.)

The verdict: it’s pretty darn scrumptious. So much so that I started taking bites as I was taking the photos! Go easy on the chocolate so it doesn’t overpower the cheese. Or if you’re a skeptic, substitute honey for the chocolate.

Either way, these s’mores make an original hors d’œuvre or a fun twist on the cheese course. And an awesome snack to get your kids hooked on
real goat cheese! 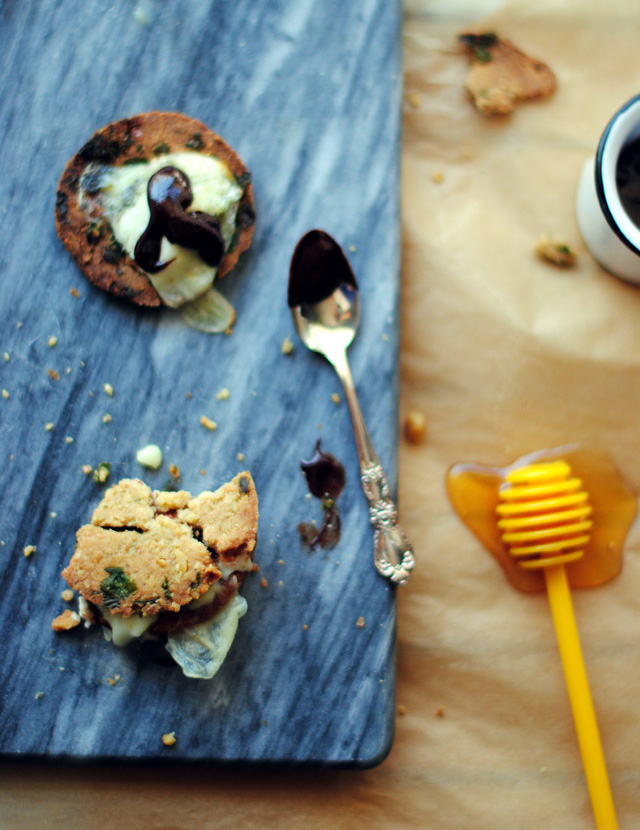 4 thoughts on “Here comes the s’more… with a twist!”